I’ll be the first to admit that I’m not the most science-minded person on the planet. I still haven’t read all of Darwin’s Origin of Species yet, but I have read Richard Dawkins’ The Selfish Gene, which argues with and expands on some of the basic assertions of Origin of Species. I missed a lot of what Dawkins was trying to convey because his writing style meandered into abstraction a bit too often and after saying repeatedly that he didn’t craft his examples and metaphors to be applicable to human behavior, he started applying them to human behavior and pontificating about morality. He set up certain genes and animals in   these strange anthropomorphic situations, which I hoped would bring his point across with  the unsettling fairy tale brilliance Kafka or Calvino, but ended up confusing the hell out of me. Maybe I’ll bust out my copy of the book or my notes later and do a full review, but that’s not what I want this post to be.

I’d like to ask Dawkins or, more realistically,  any credible evolutionary biologist who might read this to help me entertain a few thoughts that have been keeping me up at night since I first started learning about the evolutionary process. For starters, if only the fittest survive, why are there still disabled people? This one isn’t a worry of mine, but it’s one that can serve as a jumping off point for faulty eugenicist arguments, so it’s as good a place as any to begin. To people more familiar with evolution, this might sound as silly as “If people evolved from apes, why are there still apes,” and might be easily brushed off with an explanation of genetic adaptations that manifest themselves as diseases today, like Sickle Cell.  Even a scientific discovery that could explain all genetic diseases and disabilities as adaptations traced back to particular times and places or the failure of DNA to copy correctly would leave out conditions that began at or shortly after birth, like mine did. If I’m a small ape limping behind the rest of the group because of a brain hemorrhage at birth, what’s the likelihood that I’ll get picked off by the nearest predator? I’m going to take a shot in the dark and say it’s pretty high, which might be why I’ve heard very educated people try to dodge that question by saying that predators aren’t a problem for the humans anymore, so it’s not productive to worry about in this day and age, but if we were proto-humans, I might get eaten, in fact, I might not have even survived the hemorrhage.  As people’s knowledge of medicine grew, we became able to save more premature babies and children with birth defects and care for them as they got older.

All of the most effective advances in medical technology that the world has seen in the past two centuries aren’t enough to to stifle sentiments that disabled people should be dead already.  This attitude leads to and perpetuates ideas of  eugenics and pseudoscience. Unfortunately, I’m one of many disabled people who has internalized some of those ideas. I was having a conversation with an older friend of mine who is blind about dating and he said that some women aren’t attracted to disabled men because they might have an evolutionary instinct not to mate with us.  While I think this stinks of sexism and ableism, it entices me  to dig at the root of how we define the terms “able-bodied,” and “disabled.” It’s important to remember that disability is a social construct, just like race and gender. While people have tried and failed to tie race and gender firmly to a basis in concrete scientific fact, disability is still caught between its medical and social definitions. On one hand, it seems essential that we study the inner workings of physical and mental differences between people to better understand the impact that they have on our lives, but on the other, it becomes obvious after reading up on the medical history of disability that the perfectly able body and mind, in medical and scientific terms, are inventions as recent to us as the 1880s or 1890s. What’s to say that they aren’t entirely socially constructed? If they do have a steady scientific basis, they’re the most fragile states a human can be in, because almost any environmental change can upset them at any given moment. Even if we’re not disabled now, we will be when we’re older. With this in mind, we ought to be very careful about how we factor disability into our understanding of natural selection human evolution. Whether it’s explaining the food chain or trying to use pseudoscience to  create a race of supermen for a deranged state religion, disabled people need to be accounted for. Here’s a funny little image to lighten the mood from godofevolution.com licensed under Creative Commons. 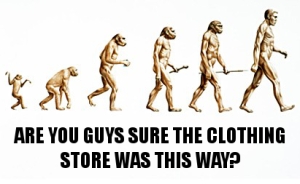 4 thoughts on “The Limping Ape: Musings and Questions about Disability and Natural Selection”